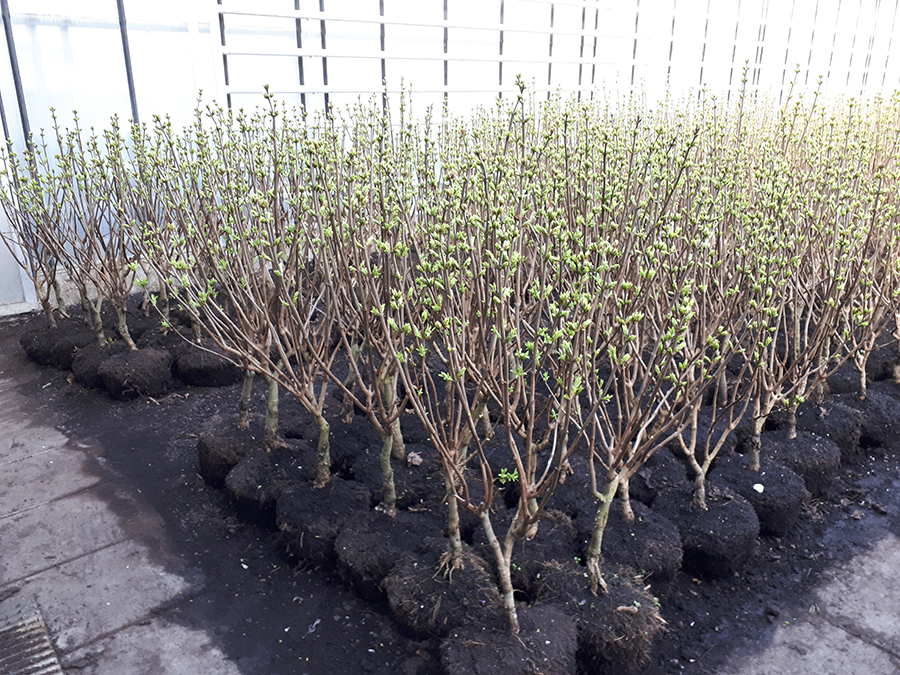 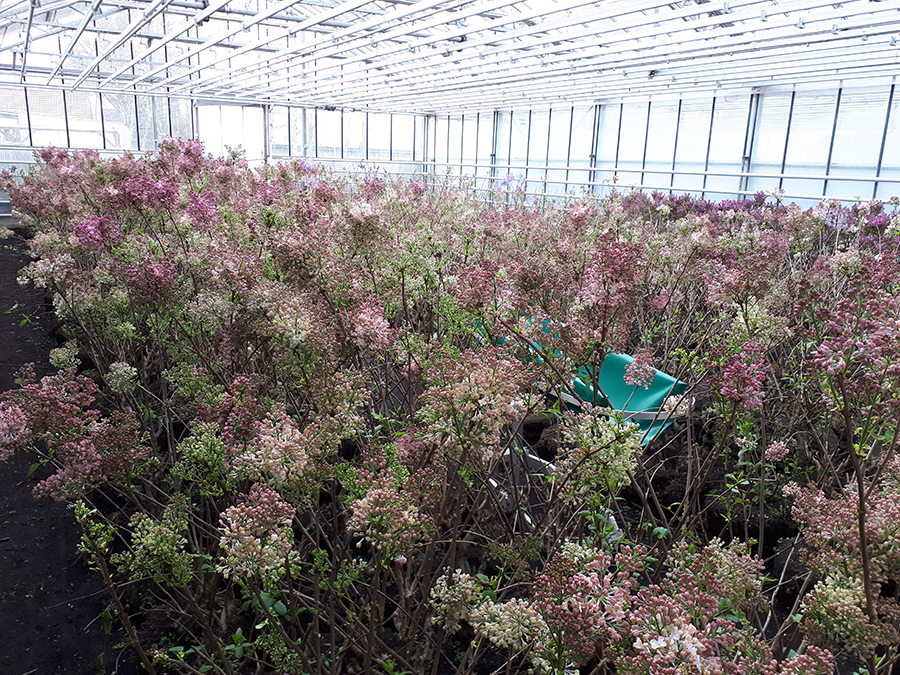 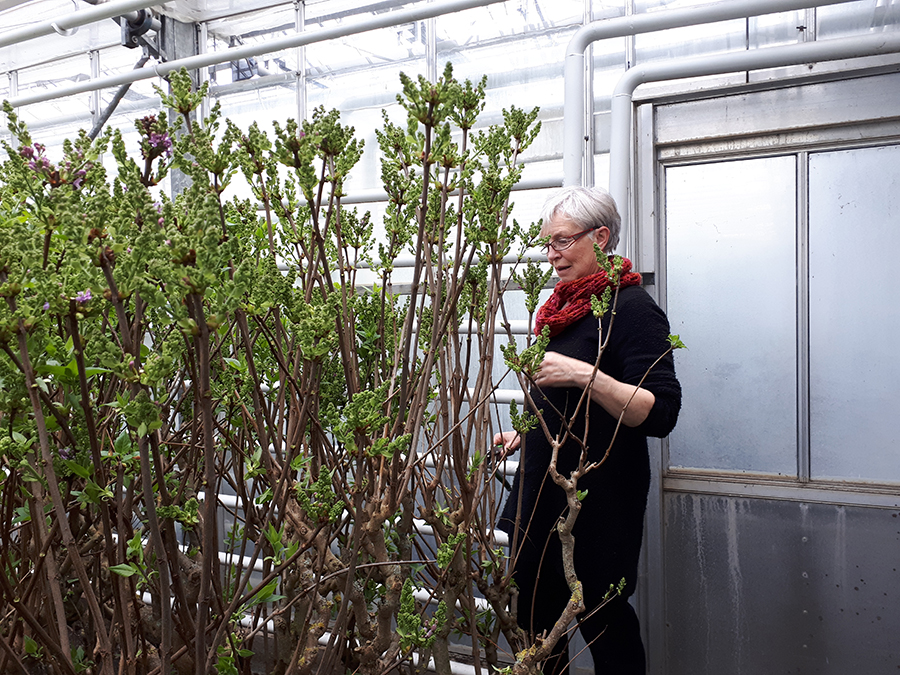 The grower and his product

Het Witte Hek (Alderden-Ceelen vof) is located in Aalsmeer, the name is derives from a bus stop.

In 1897 the company Alderden was founded. Chrysanthemums and pot plants were the first crops. Over the years various other flowers have been grown including Amaryllis, roses, tulips, carnations and lilacs.

Meanwhile, the company has continued for 5 generations and nursery ‘Het Witte Hek’ has specialized in the cultivation of various types of lilacs and snowballs (Viburnum). Together with the 3rd and 4th generation, who still work in the company every day, beautiful and high quality flowers are pursued.

Het Witte Hek does not currently have a website or other social media channel. To our question why they do not have it, it was said jokingly: “even more work …”

The cultivation of lilacs is still very traditional. A lot of manual handling is required before you have a flower in your hands. “We really need our attention for the productionprocess. This year new business cards have been made and a new logo has been designed. The website will also be built one day; our. name is wellknown in the market”, according to the cousins ​​(Marco Alderden and Ronald Ceelen) of Het Witte Hek.

The company has no permanent staff. It is run by two cousins ​​with the help of both their fathers. Only in the harvest season temporary workers are hired. In addition to the production season, there is plenty of work outside on the fields. This makes the work fun and attractive to the cousins: “The work is very varied because it is really a seasonal product. In the winter more inside, in summer always outside. We experience every season and work very close to natur. “

Lilac cultivation is a sustainable crop. Hardly any pesticides are needed for the production of the lilac branches. Growth takes place in the fields. The weather conditions during the growing season determine the end result to a large extent. Sometimes it has disadvantages, as last autumn, for example, it was much too hot and many bushes therefore budded too early. As a result, many branches lost their upper flowerbuds and this is detrimental to the ‘forcing’ of the lilacs.

Of course, the machines in the shed need the necessary power, and the company has solar panels on the roof, which allows them to provide themselveswith energy. In addition, organic fertilization is used to the maximum extent instead of artificial fertilizer. Good fungi are also added to the soil by mixing it into the compost. A healthy soil gives a strong lilac shrub. To protect the soil, the weeds are mowed or hoed as much as possible.

All lilac nurseries are traditionally situated in and around Aalsmeer, which has a reason. This right to exist has to do with the good peat soil and the supply of fresh peat soil from the Westeinder Plas (a beautiful lake in Aalsmeer). Every 2 to 4 years fresh soil is dredged from the lake and brought to the fields by boat. This beautiful peat soil, enables the lilac to keep its beautiful clod even after lifting. Other soil types do not have this property.

Indirectly, this is also good for water sports enthusiasts, because the Lake will remain deep enough for the water lovers. 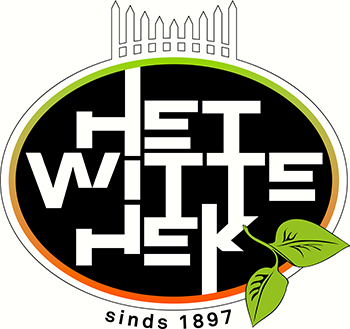 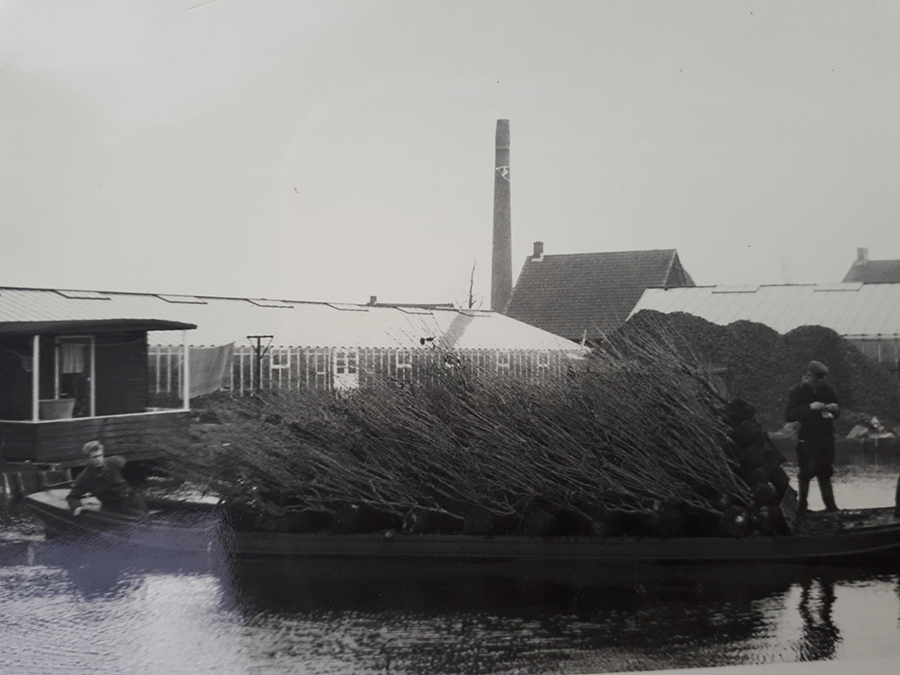 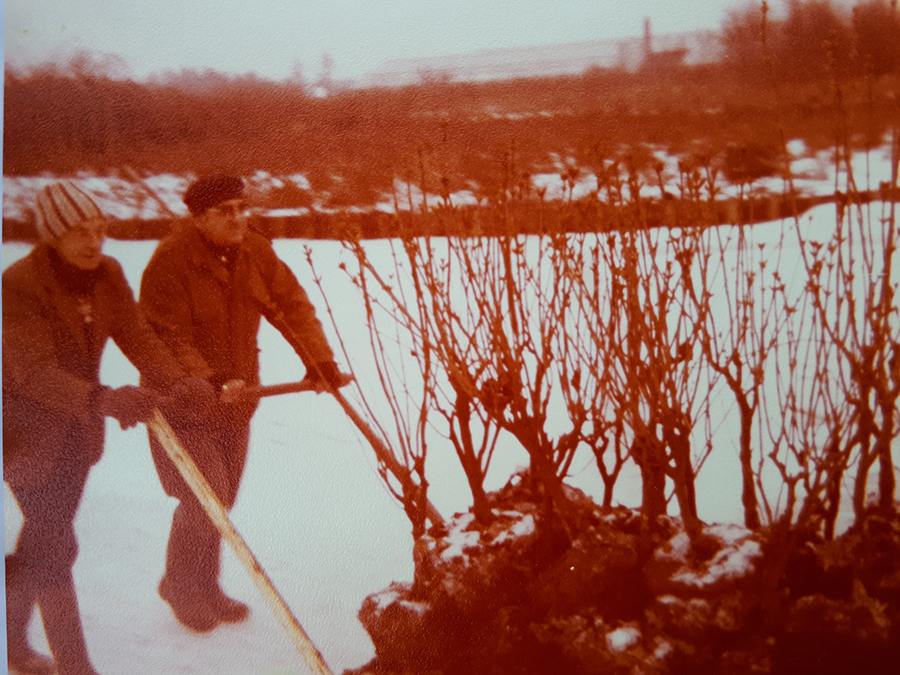 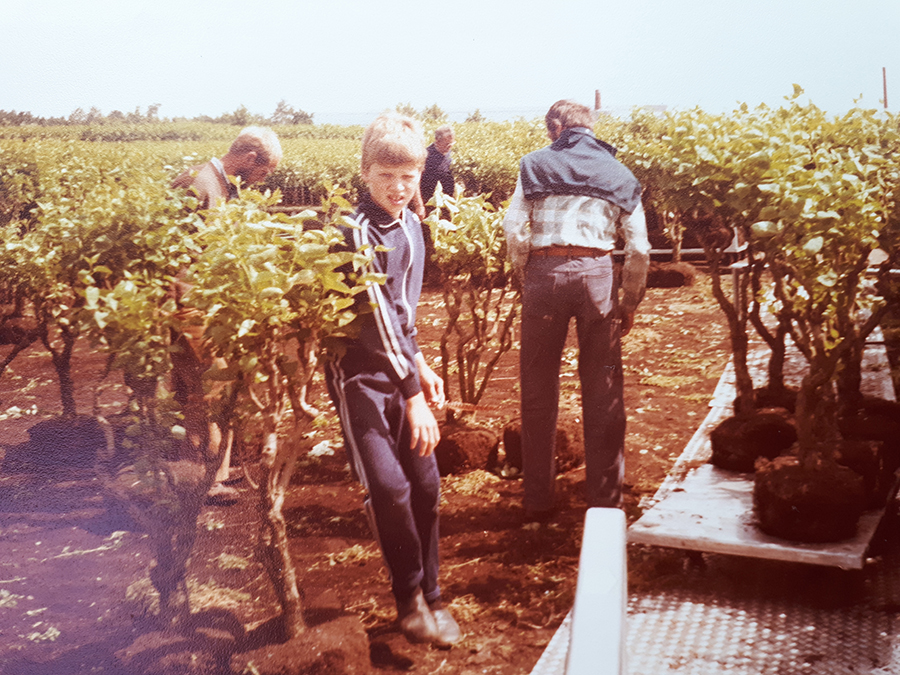 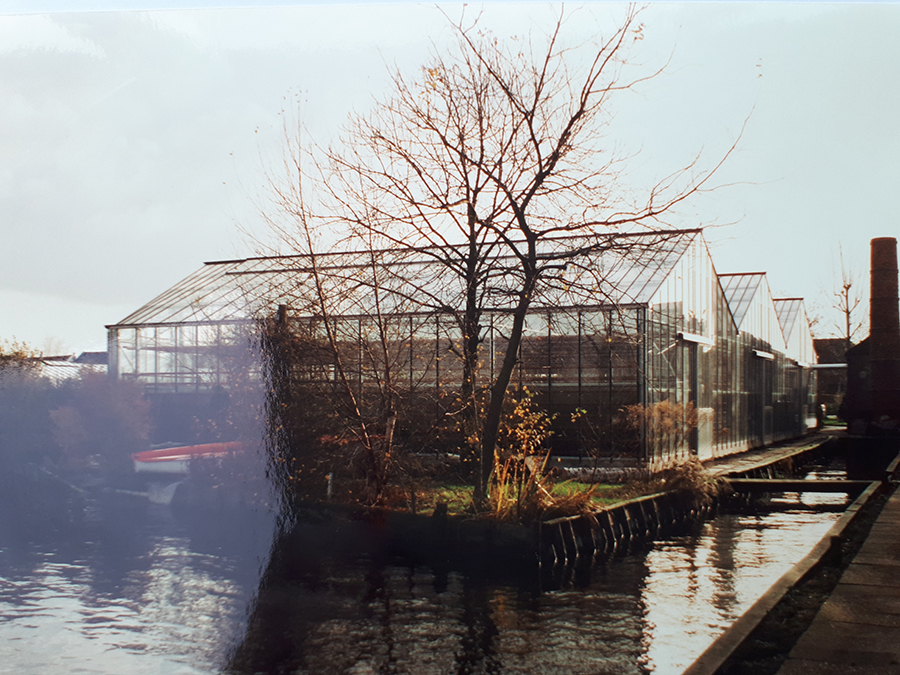 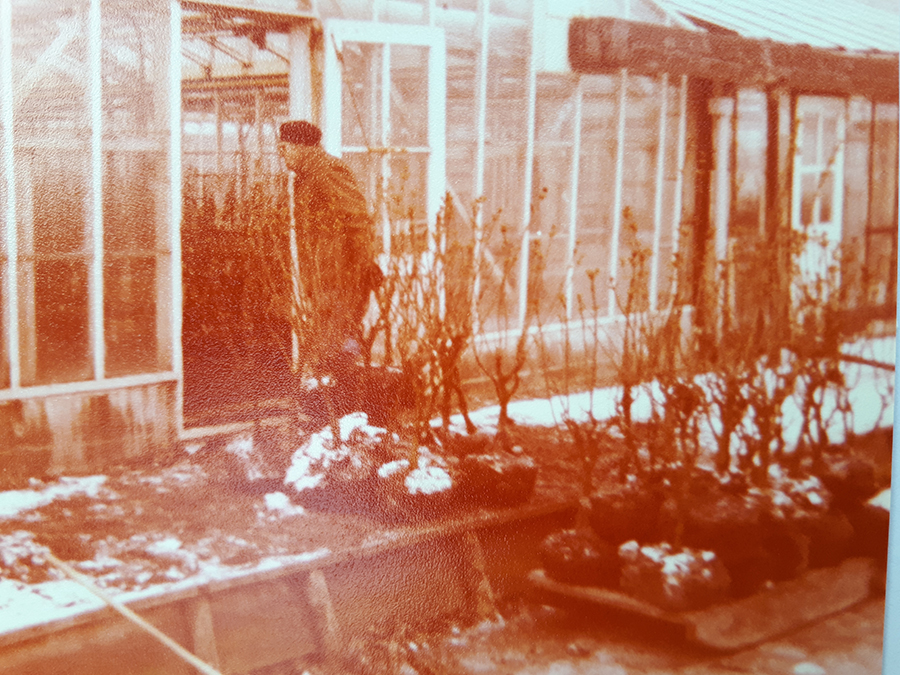 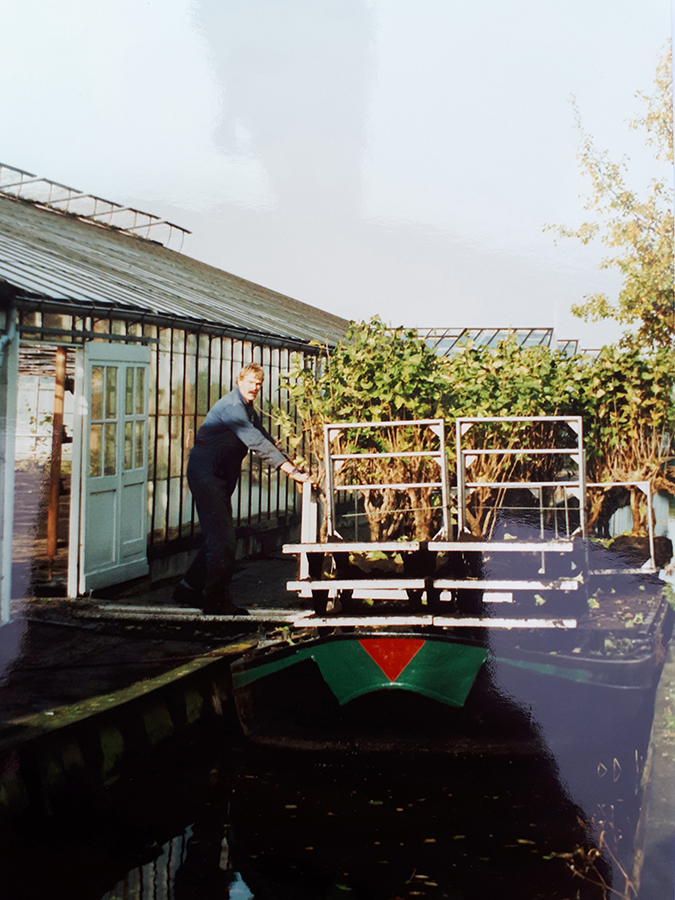 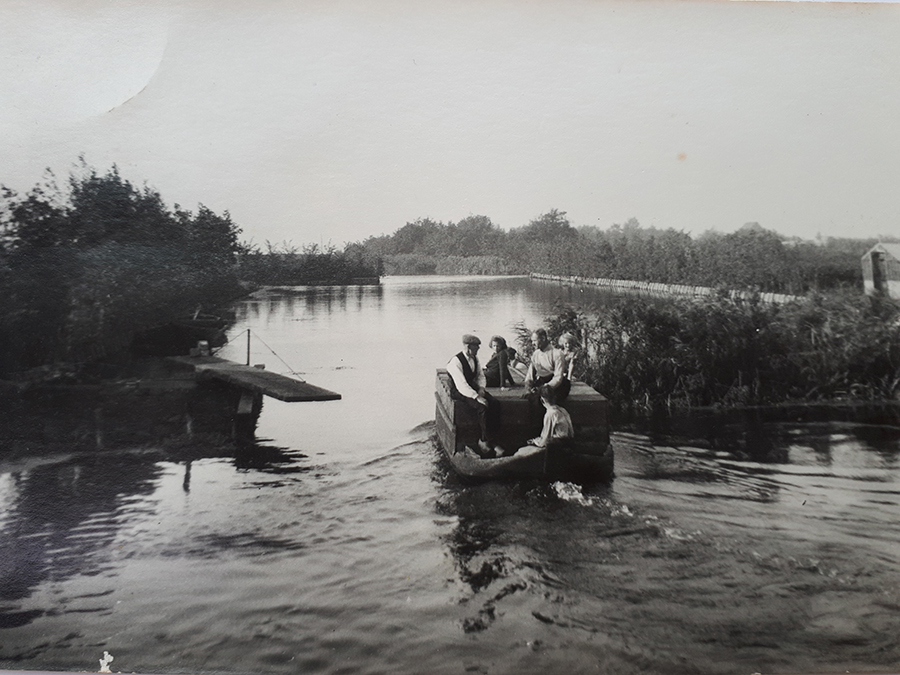 Syringa hyacinthiflora ‘Maiden’s Blush’ originates from Canada. In the 90s a group of growers travelled to Canada in search of a replacement for the white lilac ‘Madame Stepman’. Many white species were brought back from a Canadian botanical garden, however after several tests there appeared to be no suitable white variety for the production. The Stepman is still being produced, also at Het Witte Hek.

The ‘Maiden’s Blush’ came from Canada as well. It took about 10 years to develop this variety for production. In nature, the ‘Maiden’s Blush’ is an early blooming lilac, while in the greenhouse this kind of lilac is forced into flower later in the season. The Stepman, on the other hand, can be forced to flower earlier in the year.

For a lot of growers it took a while to adapt to the ‘Maiden’s Blush’. This is a species from the hyacinthiflora family. The flower clusters are very different from the known vulgaris varieties, which are much more static and stiffer.

The clusters of ‘Maiden’s Blush’ are much messier and has no even / uniform colour, some of the flowers are darker, some of them lighter. Most growers were not that enthusiastic, for example, sorting (all manual work) is much more difficult than with the vulgaris.

“But because of the good price and the enthusiastic reactions, the growers have come to appreciate the flower”, is said jokingly by the men of Het Witte Hek.

Despite the fact that the Maiden’s Blush was an unknown variety in the beginning between the static vulgaris varieties, it is a beautiful product. The shrubs give many beautiful branches in a relatively small space, the colour distincts itself from other lilacs. The ‘Maiden’s Blush’ smells really nice and is really a romantic lilac species, thus a good addition to the species that already existed.

Most lilac cultivars that are good and strong for production cannot be produced on their own roots. The ‘Maiden’s Blush’ is one of the few species where this is possible. Het Witte Hek does not have them on their own roots, but there are growers in Aalsmeer who do.

How does it work with all those lilacs?
They grow mainly on the rootstock of a wild lilac species. Most rootstocks are seedlings of wild vulgar varieties. The cultivars, such as Maiden’s Blush, Stepman, Dark Koster etc. are grafted on the rootstock.

During grafting, a cut is made in the rootstock (this can be a young or an old one). After this, a small piece of stem of the cultivar is inserted into the cut, then tied with an elastic band and sealed with wax.

After grafting on the rootstock the lilac gives its first flower stems after 4 years; therefore it takes so a very long time to get new types of lilacs that are actually good enough for flower production. As a result, there are species on the market that still date from the late 1800s.

Nowadays the breeders graft on strictly selected rootstocks. These are less vulnerable to disease and give better growth. These selected species are propagated by means of tissue culture, so that they all have the same properties.

Every year the cousins ​​order a number of these rootstocks together with a group of growers, on which cultivars are grafted.

A rootstock can be re-grafted several times. You call that top grafting. This is possible, for example, when the production of a shrub decreases. Sometimes for practical reasons, a shrub grows larger and higher and becomes too big for the greenhouse. Even if a grower wants to produce a different variety, the choice can be made to inoculate the shrub. After two years, this will again yield branches.

If a rootstock does not have to deal with soil fungi or other diseases, a rootstock can sometimes last 80 or 90 years!

In November the first shrubs go into the greenhouse. Only in this period a lot of heating is necessary. After Christmas, less heating is required.

By the time ‘Maiden’s Blush’ goes into the greenhouse, only little gas is used just to release the buds. As soon as these are budding, the greenhouse is kept cool and as light as possible.

After about 10 to 14 days, the undesirable leaves are pinched. All side shoots are removed from the branch so that all energy actually goes to the flower. After about 3 weeks the first branches can be cut.

Only the following year the lilacs can be lifted and used for production.

Lilacs generally have a high market value, which is just as well since the cultivation is extremely labor-intensive and physically heavy because of the many lifting and hand work.

A few years ago, the lilacs were sold in a greener stage than those of todays’. This was mainly to reduce costs for the export; Firstly, riper flowers are much more vulnerable during transport which increases the risk of damage. Secondly, you can fit less ripe flowers in a box for transport which increased the price of the shipment. Back then, consumers paid little money a riper lilac so breeders were therefore forced to contain shipment costs by harvesting and shipping the flowers in a greener stage.

Fortunately, people are now reconsidering. It is much better to harvest a lilac at a slightly riper stage. The flower can take advantage of the nutrients that the plant provides for much longer. This improves the vase life considerably and in the case of the ‘Maiden’s Blush’, the smell is much stronger.

The lilac is a type of shrub, which means that it has a woody stem. It is important to use a clean vase with lukewarm water and add cut flower food.

Cut the stem diagonally, before you put it in the vase. Change the water regularly and cut the stem again if necessary.

If the flowers start wilting, cut the stem again and place them in a cool spot.  You will see that the flower will rise again. 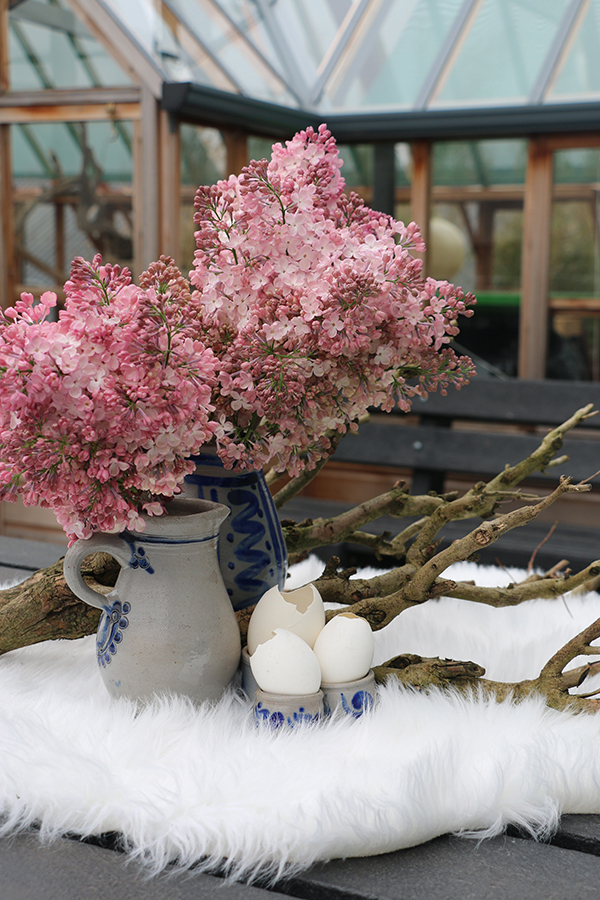