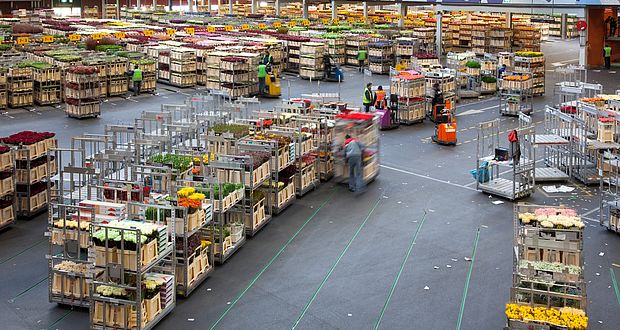 Tulips are the cornerstone on which Holland’s leadership as the largest purveyor or plants and seeds in the world is built. It all takes place at FloraHolland, the world’s largest flower auction, where today more than half of the world’s flowers move from grower to distributor and then on to you, the retail customer. It is indeed Holland’s “Wall Street for Flowers.”

Royal FloraHolland is a showcase for Dutch expertise in logistics. More than 12 billion plants and flowers —including more than 90% of Holland’s own output— change hands each year at Royal FloraHolland’s four marketplaces throughout the country. The contribution to Holland’s economy is profound: More than 250,000 jobs are the product directly and indirectly of the flower markets.

Flora Holland itself is a cooperative with 4,500 members, 9,000 suppliers, 2,500 customers, and 3000 employees. The largest of the markets is at Aalsmeer, just below Schipol Airport, south of the center of Amsterdam. Here, in a huge concrete bunker-like building, hundreds of mini-trucks hauling wagons full of plants and flowers whizz around other workers on smaller vehicles in an area the size of 200 soccer fields – more than 775 square meters. (The entire area on which the Aalsmeer installation sits is roughly the size of Monaco.) The plants arrive daily, usually overnight, for the flower auction five days a week, which starts at 6 a.m. and ends around 10 am. Elsewhere in the building, Royal FloraHolland customers —flower sellers ranging from mom and pop outlets to mega chains such as Tesco in the U.K.— are bidding against the clock on the millions of plants and flowers being sold each day.

The auction works in reverse: Rather than bidding up the price, Royal FloraHolland’s auction bids down. The bidding system is based on a clock that runs backwards: Bidding starts at 1 Euro and goes lower; buyers stop the clock at the price they want to pay and then advise how many plants they want. The average price for flowers between 2011 and 2014 was 22 cents; for house plants about 1.60, and for garden plants 93 cents. Then the clock resets. The process moves at lightening speed: In the time it takes you to read this paragraph, Royal FloraHolland would have sold perhaps ten lots of flowers.

To the casual observer, it all seems quaint in an efficient sort of way: bidding done on computers, more than half of the auction participants doing their bidding off premises, and yet here are the actual flowers right under your nose. Within hours they could be in a bouquet on your dining room table. And flowers are such an all-purpose commodity (wedding, funerals, birthdays, Valentine’s day…) they practically sell themselves.