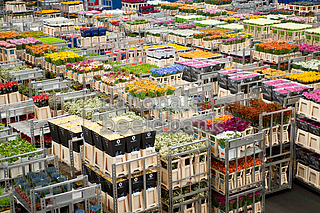 June was a sunny month with more hours of sunshine than normal, alternating with severe storms. Temperatures fluctuated widely in June, with regional differences ranging from warm to cool. The mean monthly temperature was the same as the long-term average of 15.6˚ but was lower than in 2014. June 2015 had no special international holidays and two more auction days than in 2014.

The cut flower supply was considerably higher than in June 2014, with 888.2 million stems (+6.5%). The mean price of €0.20 was 1 cent lower than last year and at the same level as 2013. The peony season began too early last year, but this year it started at the usual time. Together with peonies, the supply of the top 7 cut flowers rose. With 79% more stems, peonies realised a revenue increase of 42.5%, but the average price dropped to €0.34. The 9.7% increase in supply of spray chrysanthemums could not prevent the price from dropping 6 cents. With 5.6% more stems the average price of lilies rose to €0.45. Gerbera increased 1 cent on the average price with 13.1% more supply. The price of Lisianthus remained stable with 14% more supply. The supply of Freesia increased (+15.4%), and its price rose 1 cent (€0.15).

With more hours of sun and gardening than in June last year, 6.7% more items of garden plants were sold. The average price rose by 13% to €1.13. The supply of roses and geraniums lagged behind compared with June last year. The largest increase in revenue was recorded for Hortensia, the supply of which dropped slightly (-2.3%) while its price rose 26%. Lavender recorded a 4% higher price with 12.6% more items sold. The greatest rise in supply was Dianthus (+62%) with 8% increase in price.